Allah protects from hellfire the Muslim who defends his fellow Muslim. [Tabarani]

Our Palestinian brothers and sisters are once again facing a dangerous escalation in violence! This ongoing crisis in Palestine is claiming lives every day.

The people of Palestine need you now more than ever!
More than 90,000 people in Gaza have been displaced and are in urgent need of support.

Sadly, the numbers are expected to rise...

There will always be battles big and small, but the death of men, women, and children, killed in a conflict beyond their control remains inexcusable – dreams snuffed out along with their lives.

Ceasefire raises hope for a longer cessation of hostilities. And for the people of Gaza to try and put together, once again, their shattered land.

Donate to Palestine today for the displaced people of Palestine. And know that every penny you give goes to where it is most needed.

Donate to Palestine Charity as they need us more than ever 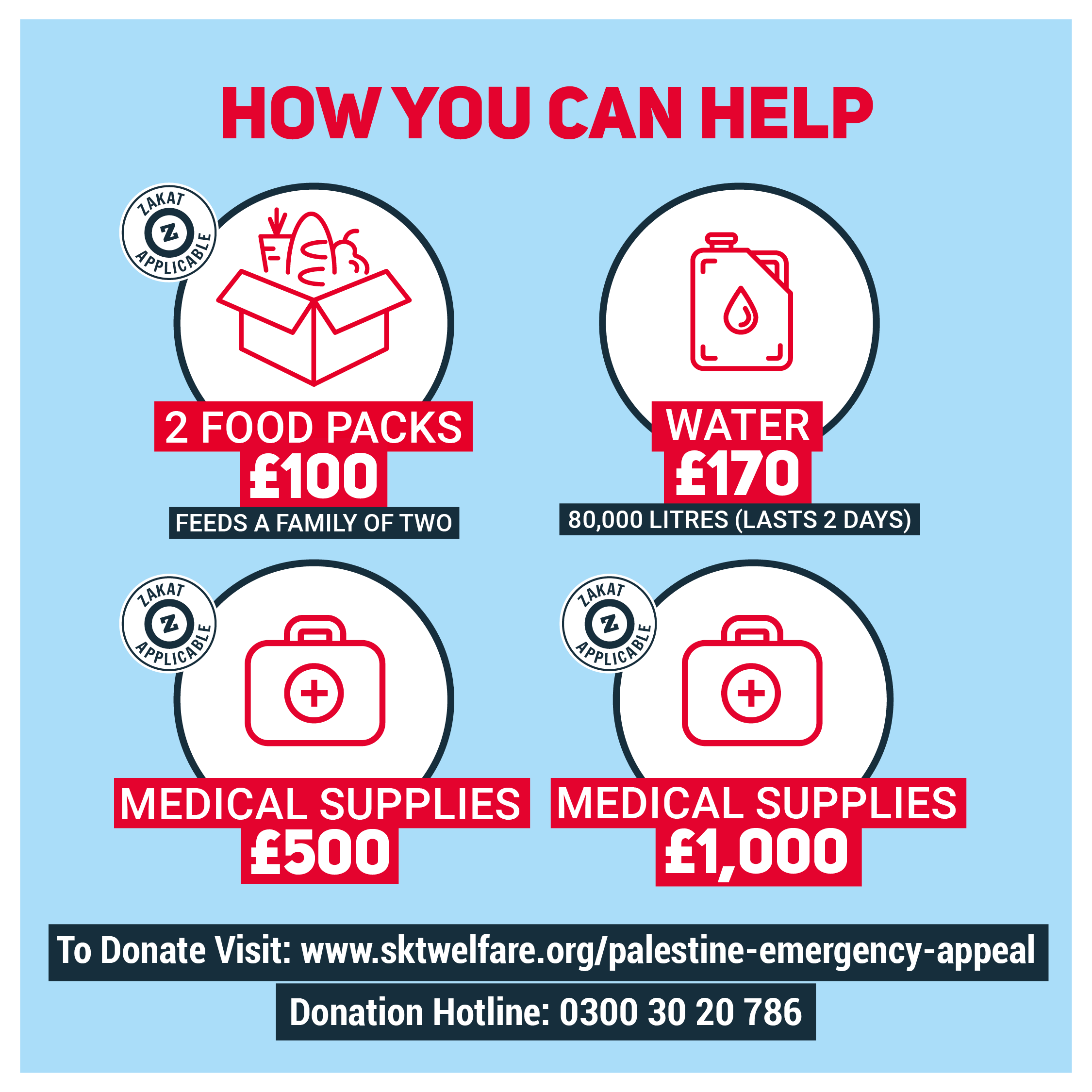 Please donate to Palestine charity as about 80% of the population relies on aid to simply survive. Palestinians face violence when they step out of their house, so with restricted movement people are struggling to find food to feed their families.

For just £100 you could provide nutritious food packs that will feed 2 families for over a month. Your Zakat can help them survive!

With the water supply often being contaminated, our Palestinian brothers and sisters go days without receiving clean water!

By supporting our Palestine charity, we can produce up to 80,000 litres of clean water which lasts two days for almost a quarter of a million impoverished Palestinians.

With hundreds being injured daily the situation in Palestine is critical.

Medical aid is urgently needed to treat our Palestinian brothers and sisters!

Donate to Palestine now, it could help provide good health and preserve their dignity during these testing times!

To date, we have delivered two water desalination plants in Gaza, with each plant producing  up to 40,000 litres of fresh water daily for almost a quarter of a million impoverished people, who previously had to travel miles to collect safe water.

No one should have to live without access to clean water.

1.3 million people on the Gaza Strip are food insecure, struggling and scraping for every single meal.

We work hard to alleviate some of that pressure and fight malnutrition; in the last six years, we have provided 23,750 Palestinians with vital food aid, and given 5,000 people fresh, hearty bread.

Since the 2014 conflict began in Gaza, SKT Welfare volunteers have also hand-delivered thousands of parcels in the Palestinian town of Khuza’a. Khuza’a, which has a population of 10,000 people, was hit hard by the conflict, and we are committed to providing the community with long-lasting support.

Donate to Gaza and make sure they receive the food they need to survive.

Donate to Palestine today, your donation could save a life!

Contribute to Palestine Charity for The sake of ALLAH (SWT)!

Your donation can provide food for 1 family for 1 month

Your donation can provide 2 days water - 80,000 litres of safe water