Last year over 1.6 million people were able to enjoy the blessings and joy of Eid, despite the challenges communities are facing with the Coronavirus pandemic, conflict, famine and poverty. With your support, we delivered fresh, wholesome Qurbani meat to families in need in Syria, Palestine, Yemen, Pakistan, India, Kashmir and Africa.

We make it easy for you, by asking for a donation to buy such an animal from an approved place – that animal being blessed and sacrificed in the quick and humane way of our faith, and its meat divided and passed on to the poor and malnourished, who too rarely enjoy its nutrition.

Every portion of Qurbani meat is delivered safely, and responsibly, under Covid-secure conditions by our SKT Welfare’s teams - on the ground, all year round, committed to helping the poor, and vulnerable.

Your Qurbani donation goes beyond just the families who receive meat. Our volunteers ensure that the sacrifice and distribution of meat are done to the highest standard, and all meat is sourced locally. In this way, we can create jobs and stimulate the local economy. Our animal skins are also donated to local educational institutions, which then sell them to fund the education of vulnerable children.

HONOUR AND COMMEMORATE THE TRADITIONs 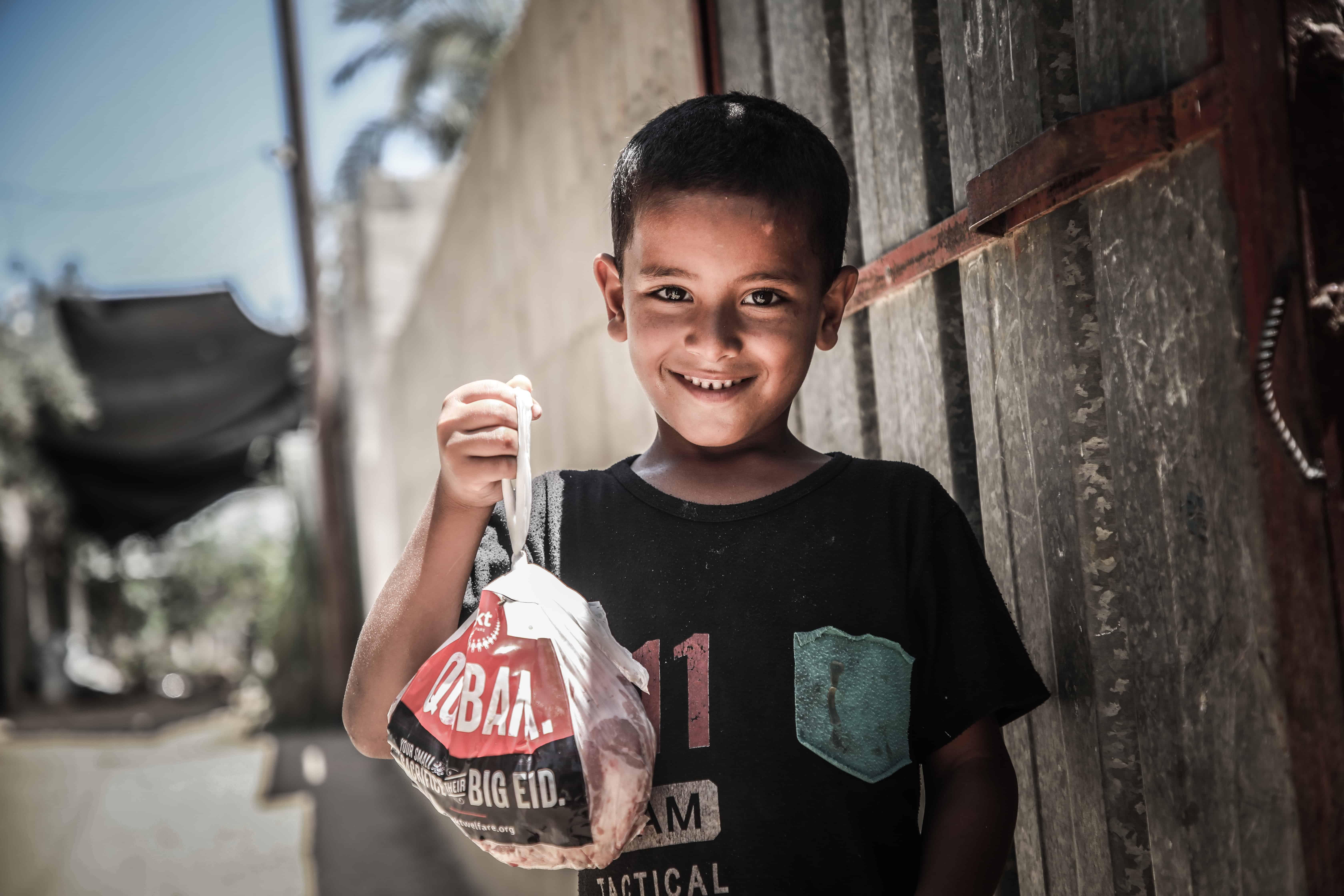 ‘The Prophet (ﷺ) sacrificed for the one who could not sacrifice from his ummah, one who bore witness to the Oneness of Allah and [his] Prophethood’ (Tabarani and Ahmad)

PROPHET IBRAHIM HAD A SERIES OF DREAMS WHERE HE WAS BEING COMMANDED TO SACRIFICE HIS ONLY, BELOVED SON, ISMAIL.

Ibrahim (a.s) dedicated himself to ALLAH (SWT) by following his dream and performing the sacrifice. However, ALLAH (SWT) intervened and a ram was substituted for Ismail (a.s).

Ismail (as) was spared because Ibrahim (as) proved he would sacrifice his son out of piety, despite the hardship, pain, and loss it would have caused him. In the same vein, Ibrahim's obedience to Allah (SWT) continues to be celebrated through religious sacrifice.

You will truly make their Eid big with your small sacrifice this Eid al Adha! If you donate £25 to Qurbani Donation, you will spread joy and help people experiencing the struggles of life, and you will gain countless rewards in return.

Your Qurbani Donation will make a difference in the lives of those in need since 100% of your donation will go to them. It doesn’t need to be this way. You can make a small sacrifice and give your Qurbani online to a family in need.

From just £25, You can book your Qurbani and provide a family in need with meat to celebrate Eid al Adha!

To ensure that the meat for Qurbani is procured according to Sharia, we ensure the following:

We distribute fresh Qurbani meat on the same day to those in need, and we provide enough meat for a family of five.

Qurbani is the Sacrifice that Muslims are giving in the holy month of Dhul Hijjah and every eligible Muslim is bound to slaughter an animal in the name of (ALLAH SWT).

How Much is Qurbani?

A share can start for just £25 this year, and can differ based on the country in which it is purchased.

What is The Nisab For Qurbani?

Qurbani is mandatory for all Muslim men and women who have reached puberty and possess the silver equivalent of 52.5 tolas or a considerable amount of wealth.

What is Online Qurbani?

Today, online platforms allow Muslims to fulfil this religious obligation via the internet. The online Qurbani provides users convenience, manageability, and ease of use, unlike traditional Qurbani.

How many days IS Qurbani allowed?

It is permissible to perform Qurbani on any of the 3 days of Eid, whether on the first day of Eid al Adha or on the second or third day.

Who is Eligible For Qurbani Meat?

Anyone can receive the meat of Qurbani and can be given to the family, friends and the poor (both Muslim and non-Muslim alike).

It is possible to divide a cow into seven parts. Individuals may purchase any number of parts or an entire cow as part of Qurbani.

Can We Give Money Instead of Qurbani?

As long as Qurbani is wajib for a person during Qurbani, then no other act of worship, such as charity, can be substituted for it. Same as Salah cannot replace fasting; they are separate acts of worship.

Is It Compulsory Not To Cut Hair Before Qurbani?

Although it is not compulsory, it is a Sunnah that is highly preferred since it is beneficial in gaining extra reward and that it is a Sunnah.

Which Animals can be a sacrifice on Eid ul Adha?

There are a number of animals we can sacrifice on Eid ul Adha, including goats, sheep, lambs, cows, and camels.

What is a 'Where Most Needed Qurbani'?

Due to the pandemic, vulnerable families are struggling to put food on the table. By letting our teams decide where to allocate your £49 Qurbani, you can share your love for Allah by providing nutritious meat to impoverished families in, but not limited to, India, Pakistan, Bangladesh, Kashmir, or Africa.

What is a 'Prophetic Qurbani'?

‘The Prophet (saw) sacrificed for the one who could not sacrifice from his Ummah, one who bore witness to the Oneness of Allah and [his] Prophethood’. [Tabarani and Ahmad]

By offering a £25 Prophetic Qurbani you are following in the steps of our beloved Prophet Muhammad (saw) and helping the Ummah.

What is a Big Eid Pack?

Share your love for ALLAH (SWT) by making Eid extra special for families in need.

By donating a £49 Big Pack, not only are you providing nutritious meat, but you are also providing an ingredients pack to add flavour to their Eid ul Adha meals and an Eid gift for the vulnerable children.

FOR JUST £25 YOU CAN FULFIL YOUR QURBANI AND PROVIDE A FAMILY IN NEED OF MEAT TO CELEBRATE EID ul adha!